Dog Toys that can be “Toying” with Your Dog’s Health… 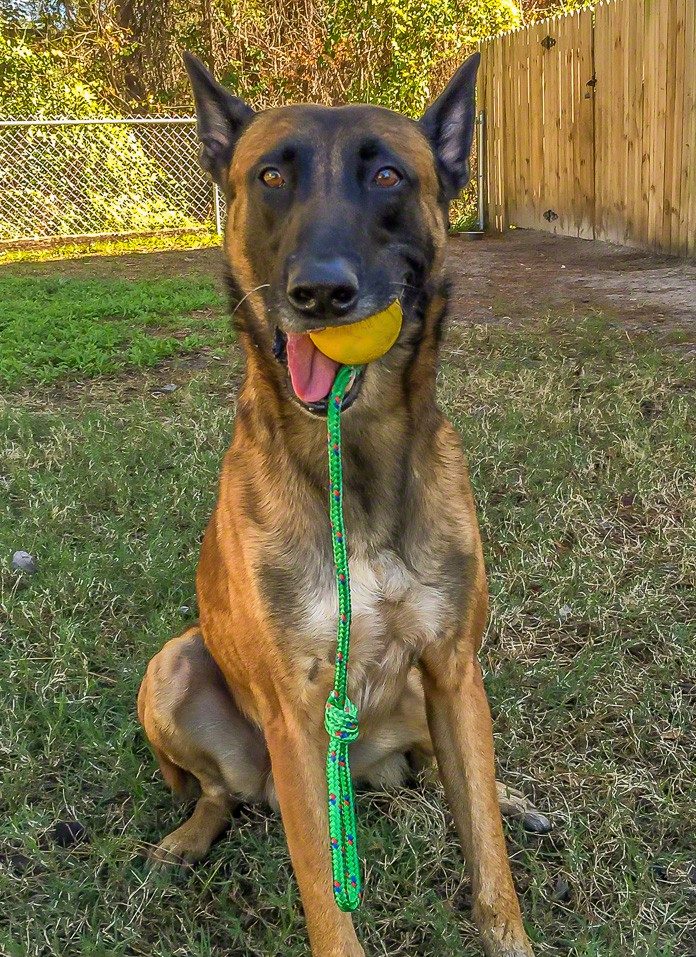 I recently came came across a great blog post titled “Warning: Dog Tennis Ball Dangers!” by The Fun Times Guide for Dogs which I wanted to share with you. It is almost a “must read” for any dog owner, since I hear about mishaps or serious injuries incurred by dog toys almost on a daily basis from Clients. And unfortunately, not everything about dog toys is as intuitive as it should be, so it’s important to educate yourself regarding the things your dog “toys” around with…

More often than not, the dog toys specifically developed for our canine companions that you find at pet stores are a disaster waiting to happen.

Some dog toys “just” affect your wallet, others will poison your dog and may cause health issues down the road, some are damaging your dog’s teeth and/or gums, while others can even potentially kill your dog. I don’t want to sound overly dramatic, there are great toys out there and used properly are completely safe!

It is important to invest a few minutes to research what dog toys your rascal is playing with!

First off, take the time to really READ the label of the toy. Most of them will already come with a mandatory warning or instructions for proper use. Stick with those recommendations or choose another toy, if the one on hand is not suited for what you had in mind. Also remember that about 98% of dog toys (true “chew toys” excluded) are NOT meant to be left out for your pup to self-entertain! Most dog toys are made for you to interact with your dog. They should be put away when the joint play-session is over. This precaution will not just keep your dog from destroying and swallowing any part(s) of the toy. It will also save you money not having to keep replacing the often quite expensive fun stuff. Not to mention any potential vet bills and your dog suffering in any way!

Looking for a safe chew toy that Mr & Ms Pooches can keep themselves busy with?

I love natural and preferably not messy, so all natural Elk Antlers or an Original Kong filled with a little (unsalted) all natural nut butter may be worth a try. (Tip: make sure you pick the appropriate size Kong for your dog to avoid danger of swallowing! And if you fill the Kong with a nut butter or paste-like treat, put it into the freezer and Fido will have longer lasting entertainment.

Lastly: keep in mind the extra calories your pup is ingesting through such treats and if you can’t give your pup the extra exercise to work off those calories, deduct an adequate portion of his dinner so you won’t put extra weight on your pup.

Ever wondered why most of Chuck-it Brand balls are fairly soft and come with holes in them?

While the “Chuck-it” ball system is super convenient (and I love many of their other products), the size and speed of the ball actually pose an immense risk of the ball getting stuck in your pup’s throat for a lot of medium size and large breeds. That is why I personally stay clear of those products.

To avoid the potential risk of any smaller ball accidentally being swallowed when caught by your dog, I generally recommend getting a ball on a string instead. The string lets you throw it quite far, too. Should the ball ever accidentally get stuck in your pooch’s throat, the string will allow you to get it back out fast! The string also makes playing less messy for you, since you can grab the string, not the slobbery ball… So, it has the benefits of the Chuck It system with none of the risks. Usually also at a lower price. Win win!

You should be able to find a ball on a string in any well-assorted pet store near you or in any online store that specializes in equipment for working dogs (such as Leerburg.com or ActiveDogs.com). Equipment developed for working dogs is typically of a little more “durable” make. For the water-lovers among you: Kong also makes a floating retrieve toy on a string, by the way: the Aqua Kong, which can double as a “string ball” on dry land.

A Quick Word on Tennis Balls

Aside from the risk of getting lodged in your dog’s throat due to its size, or parts being ingested when it comes or is torn apart, the glue used in common tennis balls is harmful to the enamel of your dog’s teeth. So, if your dog already has his/her adult teeth, that’s another reason to stay clear.

Do you have toys you love and can recommend? Any questions about toys you use and are uncertain of? I’d love for you to to share your experience in the comments below! 🙂 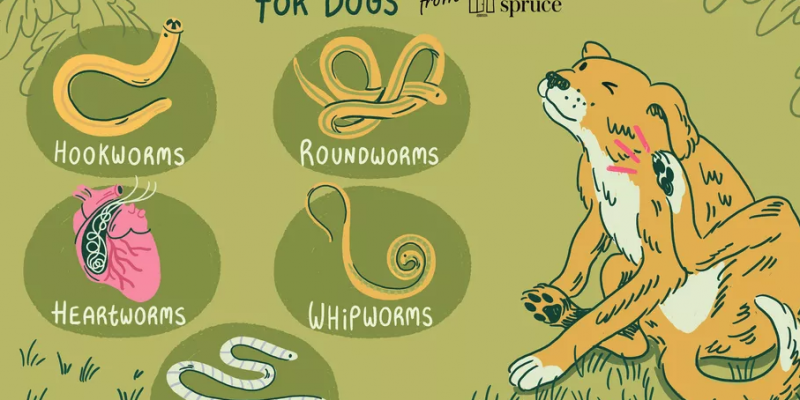 Worms in Dogs are One of the Most Common Health Issues

Most worms are parasitic, some aren’t actually worms, but bacterial infections. Like ringworm, for instance. The warm and moist climate of Florida is ideal for the squirmy, as well as for bacteria to grow and thrive. It is almost impossible to keep your dog 100% safe. Dogs are most commonly affected by heart worms, roundworms, hookworms, tapeworms, and whipworms. If you think that just because your dog is mainly inside, not around other dogs or just in your own backyard your pup is safe from getting worms – think again! It’s actually really easy for any dog to get worms. Ingesting or sniffing dirt. Eating or chewing on geckos or rodents, eating their feces or even just licking their own paws after stepping into the latter. Drinking from puddles or ponds or just swallowing water swimming. That’s all it takes! In turn, it’s different kinds of mosquitos that transmit heart worm.

Puppies and younger dogs are usually more apt to contract worms. It’s not uncommon for puppies to be exposed in their mother’s womb (roundworm). Once born, puppies don’t have a well developed immune system just yet, so the likelihood of being compromised increases. A puppies, they also have not been on a preventative for a longer period of time, which helps to build more of a resistance.

How do you know, if your Dog has worms?

Most common signs that your dog may have worms are coughing, vomiting, diarrhea, low energy, pot belly, change in appetite, losing weight, dull coat, itching, scooting their bottom across the floor, skin irritations (specially in ringworm), visible worms in fur or stool (especially roundworms, who look similar to rice corns, often still moving), and bloody stool. In early stages it may be very hard to tell any changes in your dog. That is why regular fecal exams at your vet are almost mandatory. Worm infestations that remain untreated may damage your dogs internal organs. In worst cases they may lead to unconsciousness and death.

I am generally not a big fan of stuffing dogs with lots of medications. However, especially living in a warm, humid climate such as Florida it is wise. You should make sure you keep your dog on a worm preventative and that you are very diligent about not missing the date to administer your pooch’s (most commonly) monthly dose. Unfortunately, having your dog on preventatives is already no guarantee your dog won’t still end up being affected by one worm or the other. “Lapses” in prevention, however, make it even more likely.

Heart Worm is the most damaging and can easily cost you thousands of dollars to treat!

The most important preventative is undeniably the one protecting against heart worm. It is the hardest to spot early on, is the most damaging and the most expensive and time consuming to treat. (You’re easily spending thousands over many months!)

Luckily, elimination of most (actual) worms is fairly easy. Usually administration of two rounds of a dewormer in an about 10 to 14 day time frame. The second round is necessary, since the dewormer will not kill or eliminate any eggs that may be in your dog’s intestine. Dose #2 will take care of any worms that hatch after the first dose has been given. Antibiotics and administering Ivermectin are the most common treatments of bacterial “worms”. Treatments for Ringworm typically also include topical solutions, such as special baths and ointments. Beware, btw, that humans are also susceptible to ringworm, roundworms, tapeworms and hookworms!

Do you suspect your dog may have worms or just want peace of mind for your pup and your family? Your dog’s vet can simply run a fecal test. And don’t pass on the annual parasite blood screen to catch anything that your pooch might be “hosting”! Fecal exams for your dog generally don’t run more than $20 – $30 at your vet. And you usually don’t need an appointment or take your dog in. Just bring the sample and you will be notified of the result within a few days max.

13 Everyday Foods to Get Rid of Dog Worms

Alternative ways are always worth exploring, if it’s safe to do so. Meaning, your dog doesn’t need immediate help in form of pharmaceuticals. There is a great article about how you can incorporate foods to aid getting rid of worms on “dogs naturally”. Go check out their post here!